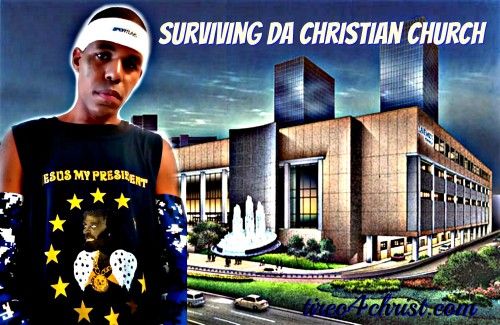 It's All About Following Jesus & Doing His Will & Having A One On One Relationship With Him & Trying Our Best To Save Souls From Hell, This World Is Dieing & Many People Are Dieing N Their Sins, Jesus Wants Us To Fully Take A True Stand For Him Cause In These Times Many People Are Scared To Speak The Truth!!!

Also Your Name Has To Be Written N The Lambs Book Of Life In Order For You To Make It To Heaven & U Have to Be Covered N Jesus Blood So Your Sins Can Be Washed Away & U Must Repent From Your Heart & Ask God To Forgive U Of Your Sins & Also U Must Forgive Others Cause If U Don't Forgive Them Then God Won't Forgive U!!!

U Have To Be Born Again N The Spirit & U Must Endure All The Way To The End For Jesus, This Walk With Jesus Is Serious & U Also Must Fully Dedicate Your Whole Life To Follow Jesus Cause If U Don't Then Whats Your Point, We All Have To Face Judgement N The End For The Life That We Have Lived Here On Earth & Have U Ever Thought About What Will Jesus Tell U On Judgement Day!!!

1.) How Much Time Did U Spend With Him, 2.) Did U Really Help Someone Get Saved From Hell 3.) Did U Have A Deep Relationship With Him 4.) Did U Really Take A Stand For Him 5.) Where U Ashamed To Proclaim His Name When U Was Alive On Earth 6.) Were U Afraid To Go All Out For Him 7.) Did U Try Your Best To Follow His Word & His Will For Your Life  8.) Did U Really Love Jesus From Your Heart & From Your Soul 9.) These Are Things That Many People Forget About But Jesus Is Going To Bring All Of This Up On Judgement Day When He Is Judging Us!!!

Christianty Is A Pagan Man Made Religon That Satan Started Many Years Years Ago To Brainwash The People & Keep Them From Knowing The Truth Notice in the Bible if u do your own research God never said that he is the God of the christians & Jesus never told us to be christians & follow christianty all while Jesus walked the earth he never told us any of that stuff but crazy people today still choose to follow it cause they would rather follow the lie instead of the truth. Here are some of things that people follow in Christianty & they don't even know that they are following Satan. 1. (Christmas)  is a pagan satanic day that many christians follow cause they believe that Jesus was born on that day, but the bible never said that Jesus was born on Dec 25th. Thats really the day the pagans follow Nimrod who was having sex with his own Mother & after he died she would worship him by this tree cause she believed that he would come to the tree to speak with her it sounds very sick but it's true do the research for yourself, 2. (Jesus Skin Color) Many christians all over the world really believe that Jesus was a white man when he walked the earth but thats not even true Jesus was really black & the bible proves it if u would just do your own research half of the people in the bible was blacks Moses was black all the disciples were blacks Jesus mother Mary was black & David,Daniel,Elijah,Samson & many others in the bible were blacks but many christians really believe that these people was white. It's not about skin color but if u say you are a follower of Christ u must know the truth cause Jesus said the truth will set u free here are the scriptures of Jesus being black (revelation 1,13-15) it says that jesus feet looked like they were burned in a furnace so that would mean that he's black & remember john wrote revelation & he was hanging with jesus when jesus walked the earth so john knew what jesus looked like also jesus was the son of david & abraham & they were both blacks read (matthew 1,1)  3. (The Sabbath) many christians really believe that the sabbath day is on sunday but its not the Sabbath day is really on Saturday when Christians all over the world go to church on sunday & worship they don't even know that they worshipping the sun God Ra cause thats what the pagans worshipped & they did this on sunday do the research for yourself if u think im making this up, so if u wanna continue to follow Christianty the choice is up to you not me I USED TO FOLLOW IT BUT NOT ANYMORE, I THANK GOD HE GOT ME OUT OF ALL THAT CRAP & I ADVISE U TO DO THE SAME BUT IT'S YOUR CHOICE CAUSE ONCE GOD SHOW U THE TRUTH U ARE NOW HELD ACCOUNTABLE FOR WHAT U KNOW

Wicked Israelites Demonic Cults Exposed, Everyone Is Not A Israelite Revealed

Satan Has Started A Demonic Cult Threw Many Israelites Today They Are Pushing Many Doctrines Of Satan & They Have Started Their Own Satanic Cult Religon & They Are Twisting Many Things Around From The Bible, Just Like What The Muslim Cult Did, Israelites have took the whole God of israel thing way out of context cause now they are going around telling everyone that they are israelites so people can join their demonic cults when really everyone is not an israelite in order for you to find out if u are really an israelite it would take serious time & research cause you would have to dig up all the information from your family bloodline & family lineage, satan has used them in a dangerous way to make people really believe that are israelites & they might not be israelites cause their bloodlines might come from a whole different background 1. they made people believe that God is only with the israelites when thats not even true cause he was with others in the bible he was with the Ethiopans as well & they were blacks read (amos 9 verse 7) 2nd. they lied saying we are all israelites when thats not true cause Noah's sons Shem & Ham & Japheth were semites & hamites do your own research & read Genesis 9, verses 18 & 19 & also Abraham hooked up with hagar who was a egyptian woman she was not an israelite read genesis 16 verses 1-3 & also Moses married an ethopian woman read (numbers 12 verse 1.) She was not an israelite it says she was an ethopian woman so why are these israelites today telling everyone that they are israelites when thats not even true your bloodline can be from many other backgrounds such as the (Canannites) the (Amorites) the (Egyptians) & the (Ethiopans) the (Semites) & (Hamites) & also did u know that Philip reached a Ethopian man read acts 8, 26-40 see the apostal Paul said he was an israelite cause he knew his bloodline & he knew his lineage but that doesen't mean that me & you are israelites cause we are not Paul, Jesus said he was sent to the (LOST) sheep of israel why was he sent to them? cause they were lost if God was really just focused on israelites then God would have not told Philip to go reach the Ethopian man cause remember God lead Philip to that man & he was not an Israelite the bible made it very clear who that man was also did u know that elijah was not a israelite he was a tishbite read (1st kings 17 verse 1 & also read 2nd kings 1 verse 8) so im saying all that to say this (SATAN) has started this demonic cult threw many israelites & now they have many people thinking they are israelites when that might not even be true, I KNOW CAUSE THEY TRIED THIS CRAP ON ME SATAN TRIED TO SUCK ME INTO IT BUT I GOT OUT OF IT & IM ENCOURAGING U PEOPLE TO DO THE SAME, THEY ARE PUSHING MANY DOCTRINES OF SATAN & GOD IS GONNA DEAL WITH THEM ALL WHO ARE APART OF IT (here are other groups of people that was in the bible & these groups of people was blacks also

& their are many more other groups of people thats in the bible, so this proves that all black people are not israelites, GET OUT OF THEY WICKED OCCULT

Christianity Is The Racist White Man Religion Dat Satan Started To Brainwash People God Never Told Us To Become Christians So Who Will U Listen To, Jesus Or Other People Tireo Reveals Christianity Lies & He Helps People Get Saved From Hell No Were In The Bible Did God Say He's The God Of The Christians Pagan Christians Are Just Like Non Believers,, They Don't Believe N Full Truth Tireo Blames Christianity For All The Pagan Lies They Told Everyone Tireo Breaks Down The Whole Entire Walk With God In One Video Different Levels Of Satanism In Religion,, Get Out Of Religion Real Followers Of God Are Not Church Goers,,